You see, they were both witches. And I am hungry! Smiling, the pumpkin realized that being good was hard, but it was worth it. Smiling, he said, 'You were chosen because you wanted to be good, and you love to obey. He started moaning, like he'd seen the spirits of the dead do at many a Samhain, and walked slowly from his house with his family in tow.

You're having breakfast with your wife one morning when your cell phone buzzes on the counter across the room. That night, your sleep is disturbed by the feeling that someone is watching you.

And when it was dark and the farmer said, 'Sleep, little ones It was a homecoming of sorts, and most welcome to families in mourning for loved ones. For a spirit - even the son of a god - could not suffer to pass the doors of the living unless invited inside, but a broken home offered no protection. Halfway there, you look in the rearview mirror and find that you now have five passengers. And she was very, very, happy. You don't think much about it until lunch when you thumb through the cards to find that one in the middle of the deck has a photo on the front. The bridegroom-to-be, who had sneaked after them and observed them, was tempted to take a swallow from the glass. He hadn't brought a glass with him, so he had to return on foot. Every day, the farmer came and said, 'We're going to have delicious pies this year--yes, indeed, they will be lovely. The plague took every last one of the poor bastards. As the story progresses, the reader soon starts to realize that this is a lottery that one might not want to win. In the center is the priest, holding the leash to a demonic-looking Doberman. She looked just like her mother, the old seed pumpkin, and she suddenly had an idea Then the sexton became angry and poured the water over the animal's back.

Smiling, he cut our pumpkin's roots free and picked her up, saying, 'Your time has come, my little Baby. All of the other pumpkins had turned orange by now. 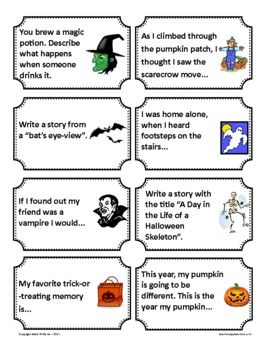 Note: Before the actual writing, you can also have a scaffolding activity, in which students will read a ghost story or a scary Halloween story and discuss as a class the characteristics of this genre.